I made a painting for my little videos to be projected onto. Trying to always combine different things into a single mess for everything to seem more clear to me.

To view and listen to the projections, follow the link below:

During the month of November, I had a display in the Fishbowl II window of Blackfish Gallery facing NW 9th Avenue near the Pearl District. It was terrifying and weird, yet educational. When I came back to take down the exhibit, I was pleasantly surprised to find that I sold two paintings to an unknown buyer (World on Fire and Drones and Rain). 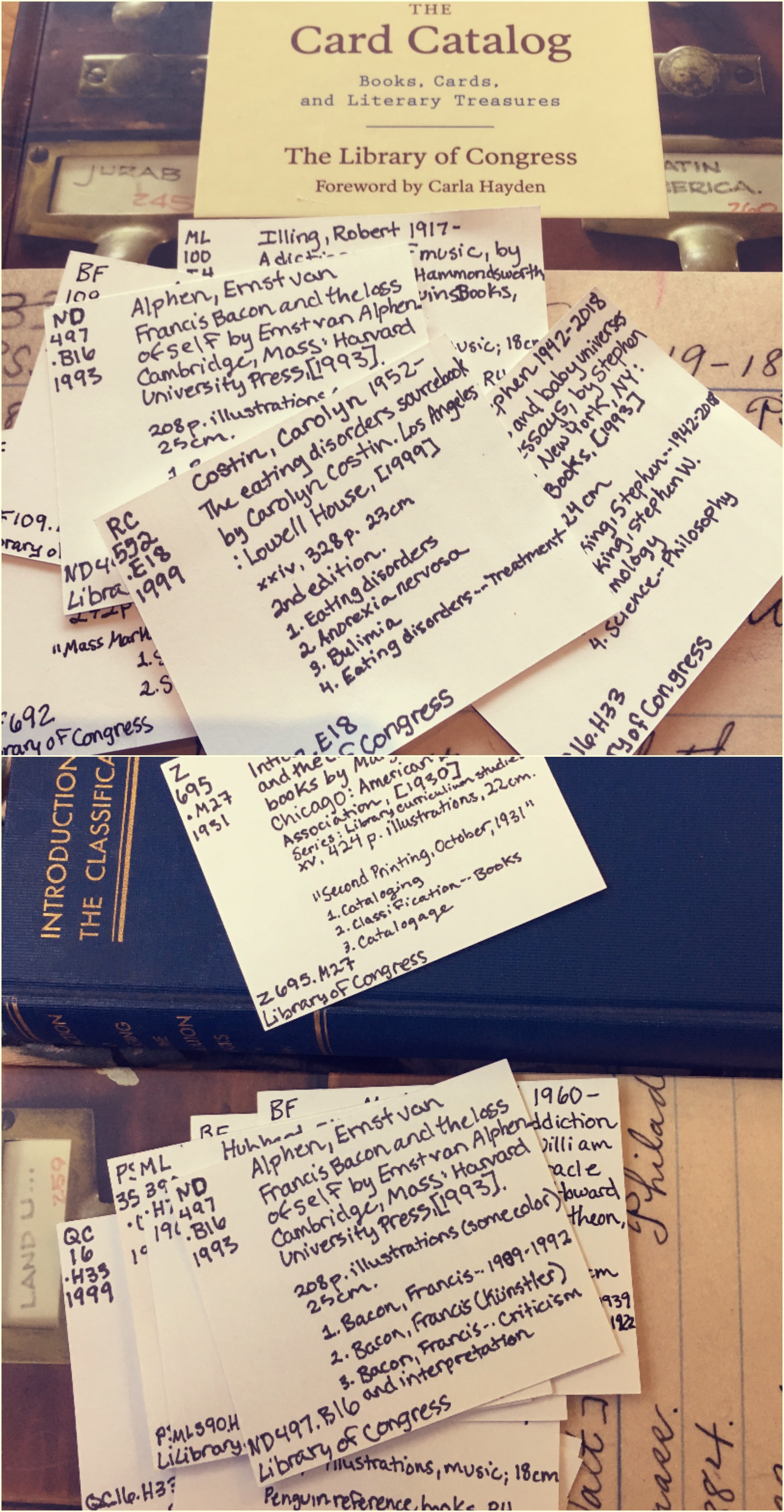 I think need a break from the Mnemonic Whale for a while. I’m happy with the progress I’ve made on it, but I am ready to work on bigger paintings and make videos. Although the whale is a vessel that is never complete (more side drawers need to be added someday in the future), it is currently fulfilling its duty at Backstory Books. For some of the books chosen from Amanda’s shop (and subsequently placed behind each door), there is a corresponding catalog card in the right side drawer.

I took inspiration from the book The Card Catalog by The Library of Congress published last year. Actual visual examples win me over every time and it was more proof for me that art and library science can be combined. My handwriting has always been the worst. Attempting to fit my bulbous and kinked scrawl onto a 3 inch index card is a little personal challenge of mine (“library hand” penmanship this is not). But practice will eventually make perfect (or close enough) and I hope to learn “library hand” someday. For now, making these little cards are actually helping me with recognizing categories more easily at work. They are free for the taking of course ~

The updated Mnemonic Whale page can be seen here: https://sylviedakotahuhn.com/others/mnemonicwhale/

Runs from March 10th through the first week of April.

The front and left side of the Mnemonic Whale is completed. For the left end, I added/modified a few tiny paintings I did years ago to the top + silicone, wood glue, gold and red ink. On the front, I sanded down the edges of the doors so they closed completely and I outlined the whale carving in gold ink. Now all it needs is the top layer, right end card catalog drawers, and proper innards (more about that soon).

I made the kind folks who showed up to my opening each fill out an answer card from my archives/preservation info table, which included a display of articles and a Hollinger catalog.

“If we were to become extinct, what would you want to leave behind as an artifact of yourself to be found by future inhabitants (if the earth is still inhabitable)?”

(For example: your favorite jacket, your ashes posthumously pressed into vinyl, your paintings, your writings, your skeleton posthumously bronzed with two middle fingers raised)

“What preservation processes would you take to make sure this artifact survives extreme temperatures/time?”

The tiny cards are now safely behind the Z section door of the Mnemonic Whale, but I hope to eventually put them in a tiny card catalog drawer I’ll be attaching to the right side. I will definitely be welcoming more answers from folks, so I’ll be keeping a few blank cards on me when I’m out and about. In the future I’ll be putting together a handmade book expounding on these ideas from friends.

In the 16th century, Italian philosopher Giulio Camillo (1480-1544) dictated a proposal titled L’Idea del Theatro (The Idea of the Theatre). This proposal outlined his dream for ‘The Theatre of Memory’, a wooden amphitheater that would function as a physical vessel for all the knowledge in the world (or, in other words, a collection of memories). The semicircular auditorium would be divided into seven sections, each section would be decorated with an assigned planet (or star) known during that time, including related Kabbalistic and mythological figures. The seven sections would each hold numerous doored compartments of scrolls and cards, categorized by subject matter. Camillo would never live to see his vision ever manifest. In 1966, British historian Frances Yates chronicled ‘The Theatre of Memory’ in her book on Classical and Renaissance-era mnemonic systems titled The Art of Memory, which helped resurrect Camillo’s concept for the masses.

From the white whale in Moby Dick to the story of Jonah in the belly of the whale in the Old Testament, whales have had a variety of symbolic interpretations in literature – the mother’s womb, the unconscious mind, human fear, purity, and the unattainable. The colossal mass of a whale can also evoke an allegory of a vessel or an abode – a body of flesh holding answers. ‘The Mnemonic Whale’ is a deviation from ‘The Theatre of Memory’ in size, shape and functional design (although the inside of each door has a painted celestial body from Camillo’s proposal). Instead of attempting to hold all the knowledge in the world, the seven divisions are based off of simplified, selected categories from the Library of Congress (LOC) – B (Psychology/Philosophy), M (Music), N (Fine Arts), P (Literature/Fiction), Q (Science), R (Medicine) and Z (Bibliography/Library).

As a miniature lending/exchange library, you are encouraged to both take and contribute books, zines, music, or any objects that you personally believe could fit into either of these seven subject-categories. In the end, we are working to achieve a future archive of a collective memory of the community. 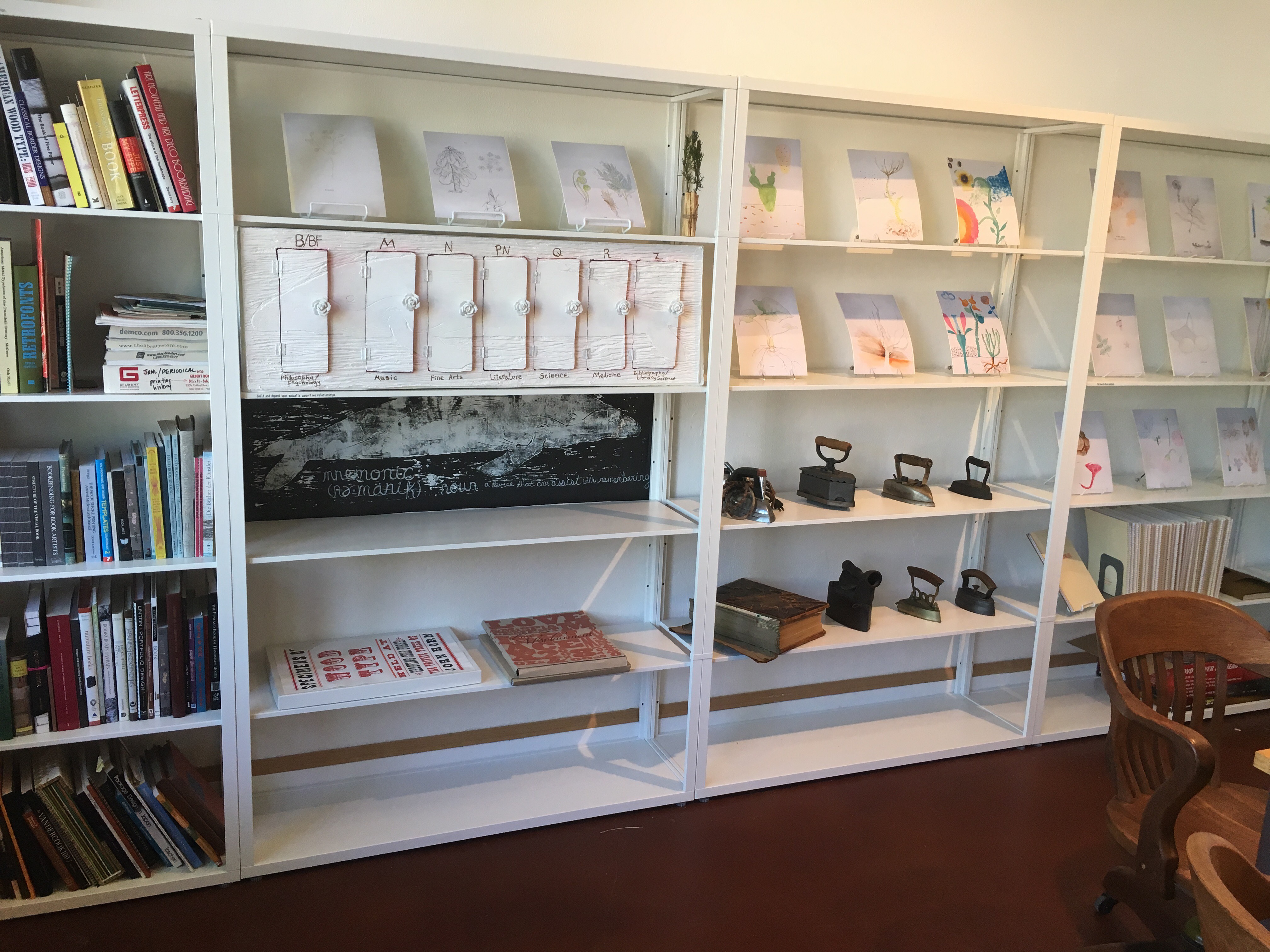 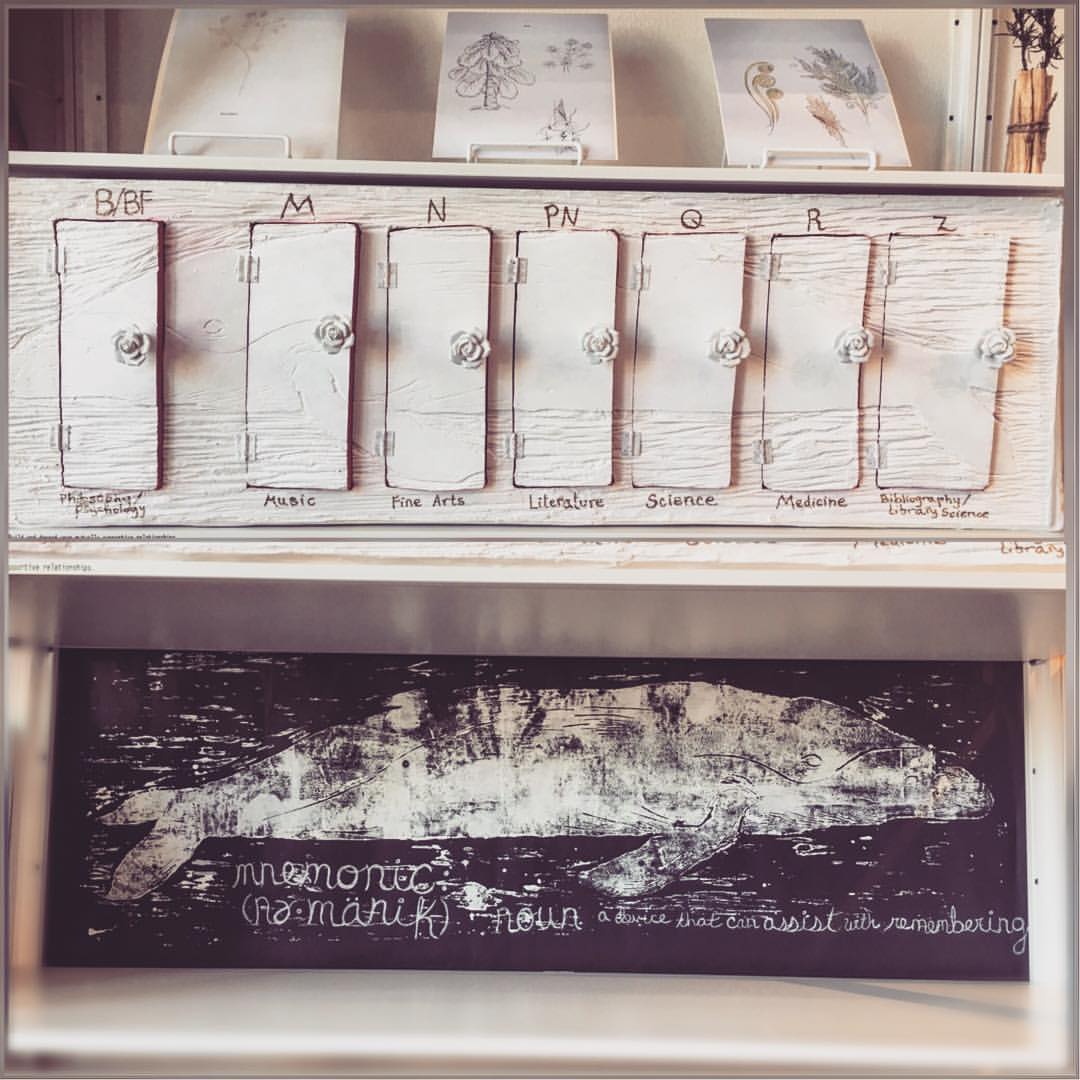 Foer, J. (2012). Moonwalking with Einstein: the art and science of remembering everything. New York: Penguin Press.

on the other line